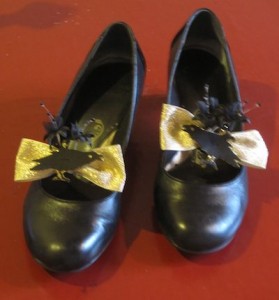 It’s been October 2011 on this blog for far too long. Yes, it’s already five months since I posted after The Crimson Shard launch. Those months have been a whirlwind of travel, book promotion and planning the next project.

I’ve been from Bangkok to Boston and some other lovely places in between. I toured around West Sussex twice, speaking to avid readers and enjoying the wonderful countryside. Last week I attended the Scottish Children’s Book Awards (in these shoes), for which The Blackhope Enigma was short-listed, and saw a scene from my book performed live by talented young actors from the Lyceum Youth Theatre.

I am incredibly thankful for my creative life right now. There are several very exciting things happening that I will be revealing here soon. The top news is that I am writing a third book in the series that started with Blackhope. This will round out the series into a trilogy and I find that immensely satisfying. When I first set out to write a novel, I had no idea that it would evolve into a sequel and then another. The whole thing has happened organically. Each of the books can stand alone and yet they have links that pull them together into a whole.

After having written two books featuring Sunni and Blaise, my teenage characters, it’s great to be telling the next part of their adventure together. And it’s just as much an adventure for me to find out what they are going to do next!