Here’s the way I paint in acrylics.. 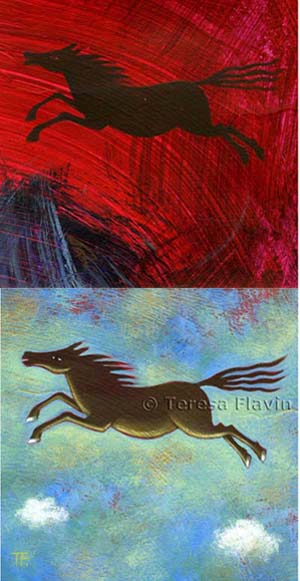 Celestial Steed II (Before & After)

Things are flying here in the studio, even horses. I am busy writing the Next Book, but over the weekend I took a few hours off to work on some exclusive and top secret items for the launch of The Blackhope Enigma on July 1.

I find that making new artwork really gets my writing juices flowing. And the writing gets my drawing juices flowing! So it’s a win/win situation. Right now though, my priority is on writing, so the wee bits of artwork are like a refreshing short break.

My miniature mixed media paintings (about four inches square) have been selling nicely at the Art Exposure Gallery in Glasgow. As they recently sold the last one they had, I decided I would finish up the little flying horse that’s been sitting neglected in the studio. I thought you might be interested in seeing a before and after on this one. I work in acrylics on paper to start with. You can see on the top painting that I just slapped some bright wild texture down and painted a dark horse silhouette in Burnt Umber on top. With acrylics, you can work from dark to light, so I lightened up the horse to add mass and detail. Next, I very loosely brushed Cerulean Blue mixed with white over the red background, so that some still shows through.

I added some Naples Yellow into the Cerulean mix to give it a jade-like hue and worked some of that on top in places, kind of randomly. Then a bit more straight Cerulean in places…and then an even more yellow Cerulean/Naples mix in other places. On top of all that, I got some white into the golden-jade mix and scumbled that around the horse to make it glow. A couple of puffy white clouds appeared underneath to complete the scene.

Then came the fun, finger-painting part: with my fore finger, I dabbed and smeared gold wax gilt in places to make the whole painting sparkle.

I like working in layers and allowing the colour and texture of the underpainting to show through. The wax gilt catches onto the textures and highlights them, almost like raising fingerprints.

And, if you have been following this blog since I began it just over a year ago (!), you know that I love flying beasts, especially horses. But I will say goodbye to this horse and take him down to my friends at the Art Exposure Gallery, where you can pop in and have a look at him from Tuesdays to Saturdays from 12pm to 5pm.