The Trilogy Is Finished! 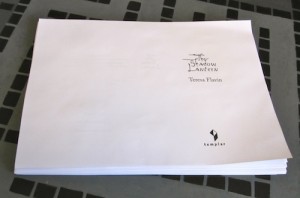 It’s been a week since I said goodbye to The Shadow Lantern and wished it well on its journey to the printer. The next time I see it, the pile of papers that made up the proof copy will have been transformed into a bound book with another stunning cover. One small part of me feels a bit melancholy about finishing my characters’ stories, but mostly I am excited about the book launch and UK tour later this spring.

It still feels slightly unreal to have created three novels. If anyone had told me seven years ago that I would morph into a novelist, I would have laughed in disbelief. But the sudden urge to start writing The Blackhope Enigma was so strong, I knew I had to go with it. The process was never easy because I had so much to learn (and always will!) about crafting stories, but it was fascinating and fulfilling. Knowing so many young people (and adults) had enjoyed reading it really spurred me on. By the time I began planning The Crimson Shard, I was hooked on my characters and their stories. The sequel grew organically out the first book and as soon as I had finished it, I knew that there would be a third and final story.

I’ve always loved trilogies. There is something about the number three that is quite powerful and complete for me. I feel very proud of all three books and am looking forward to presenting The Shadow Lantern to the world in just a few months.