The Launch Event in London! 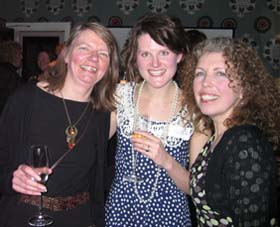 I was really delighted to attend last week’s event in this lovely room at the Covent Garden Hotel – as one of Templar’s new authors! Yes, after months of keeping things under wraps, I can now reveal that The Blackhope Enigma will be published this summer. It’s my first illustrated novel for ages 9+ and I categorize it as “a historical fantasy-adventure with lashings of art and magic”.

That’s me on the right of the photo, with the wonderful duo of Anne Finnis, Consulting Editor, and Emily Hawkins, Senior Editor. If I look at all starry-eyed, it’s because I was certainly feeling that way! I had just seen the advance review copies of my book, with its very classy cover, and it began to sink in that after years of hard work, The Blackhope Enigma is on its way.

I feel honored to have my book on the Templar 2010 Fiction List with a host of excellent authors and illustrators: Not Bad for a Bad Lad by Michael Morpurgo, former UK Children’s Laureate, and illustrated by the multi-talented Michael Foreman; A Right Royal Disaster by fabulous author-illustrator Simon Bartram; and the much anticipated The Dragonology Chronicles: The Dragon Diary by Dugald Steer.

There is already online buzz about Australian Richard Harland’s steampunk novel Worldshaker and Stephanie Burgis’s A Most Improper Magick. (If you visit Stephanie’s website, you can watch a neat book trailer and enter a competition to win an advance review copy.)

I am intrigued by Kate de Goldi’s The Ten O’Clock Question, which was an award-winning bestseller in her native New Zealand. The same goes for Johnny O’Brien’s Jack Christie books. I met Johnny at the launch – you could not meet a nicer man, and he’s a history buff to boot. Read more about Day of the Assassins and Day of Deliverance at his very cool site.

Last, but not least, is the beguiling story of Eric from one of my heroes of contemporary illustration, Shaun Tan. You can reread my blog about Tales from Outer Suburbia here.

What illustrious company I find myself in! As I type, I am eyeing the pile of advance copies I was given at the launch and wondering which I should read first. It’s going to be a difficult but pleasurable choice.