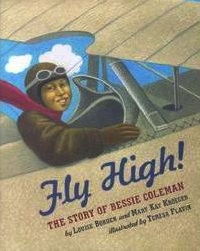 I spent yesterday introducing three groups of Edinburgh schoolchildren to the wonderful role model, Bessie Coleman, whose story I illustrated years ago. Since I began writing and illustrating my own books, I have spoken less about the picture books I illustrated, so I was really pleased to be asked to talk about Bessie for Black History Month (which is celebrated in October here in the UK). Fly High! The Story of Bessie Coleman by Louise Borden and Mary Kay Kroeger is the inspiring story of the first African-American to earn a pilot’s license in 1921.

Bessie was determined to be ‘somebody‘ in life. She worked hard in the cotton fields as a child and learned as much as she could in the one-room schoolhouse she walked miles to everyday. As a young woman she sought her fortune in post-World War I Chicago, where she heard returning soldiers’ tales of French women flying airplanes. She set her sights on becoming a pilot and traveled to France to learn to fly biplanes. She returned to the USA as a fully-fledged pilot, demonstrating her daredevil skills in air shows until she was tragically killed in a flight accident in 1926 at the age of 34.

Bessie was a huge inspiration to many people, not least for her efforts to achieve equal rights for African-Americans. Fly High!‘s message to young readers is that if you work hard towards your dream, you can be somebody too. With that in mind, I asked the pupils in my workshops yesterday to think about what their dreams are and to express them artistically in words and pictures of their own.

First we talked about what they would like to do in their lives and what sort of people they would like to be. I was touched and heartened to hear how many of the children wanted to work in jobs that helped people and animals. Quite a few children wanted to do creative work: artist, writer, filmmaker, games designer. And when I asked them what sort of qualities they wanted to have as grown-ups, I instantly got answers like ‘kind’, ‘achieving’, ‘hard-working’, ‘friendly’ and ‘funny’.

By the time I let them loose with marker pens and paper, almost all the pupils had very strong ideas of what they wanted to show about their dreams. They spent time carefully lettering their ideas and drawing themselves as adults doing their dream jobs. The energy and concentration they put into their posters was incredible. I felt hugely inspired myself!

I would like to think the children might keep their posters and look at them again in a few years to see whether their dreams have evolved… and perhaps to remind themselves of the things they cared deeply about at a younger age.