If you know my stories in the Blackhope Enigma trilogy, you know that I have a thing about mazes and labyrinths. 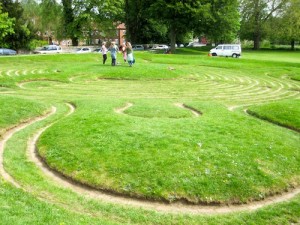 Because I live in England, there are plenty of ancient and new ones to visit. I like to hunt them down, walk them, figure them out and point people towards them. There’s one particular location that I’ve been salivating over for quite  some time and this past weekend I finally got there. The beautiful Essex market town of Saffron Walden boasts both an ancient turf maze on its Common and a Victorian hedge maze at Bridge End Gardens. There is even a Saffron Walden Maze Festival in August.

For me, the turf maze should really be called a labyrinth because it has only one path that winds around and around to the centre. But since it’s been called a maze since at least 1699, if not earlier, I’ll bow to tradition. It’s a huge maze and took me at least twenty minutes to walk around it. When I got to the centre I came across some lovely ladies circle dancing around May flowers (which reminded me ever so slightly of something from the film The Wicker Man, but in a good way). 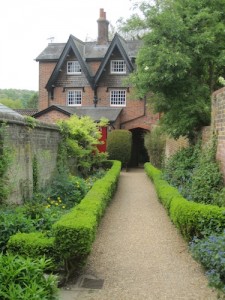 To get to Bridge End Gardens’ hedge maze, you can walk through a tunnel under this pretty house. There’s definitely something otherworldly about the place, as if fairies might live in the gardens beyond. 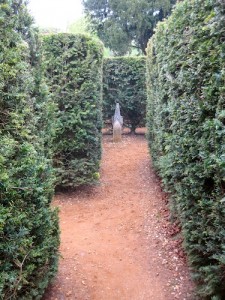 We wondered what it was like at night, especially in the hedge maze. Pretty spooky, I’ll wager. 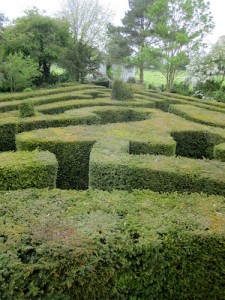 The hedge maze was nicely tricky to figure out and has a good viewpoint as your reward for finding the centre. if you’ve got a good memory, you’ll get back out in flash. If not, you’ll stumble upon the strange stone wolves, urns and towers in its dead ends all over again!