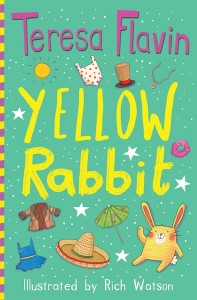 Happy Second Half of January! By now we’ve all had plenty of time to assess 2013 and make wishes for 2014. Here are a few things I’ve been thinking about.

Launching two new books for children and young people. In May Templar published The Shadow Lantern in the UK and brought my Blackhope Enigma middle grade fantasy trilogy to a close. I am immensely thrilled that the books are out there in the world and finding their tribe of readers. When The Shadow Lantern comes out in the USA this July, I will feel a great sense of completion but there are aspects of the stories that will always inspire me. You never know, they might just spawn a bit of artwork down the line.

In November, Barrington Stoke brought out Yellow Rabbit, a story for younger children illustrated by Rich Watson. I originally wrote Yellow Rabbit for an anthology called Wow 366! Each story could only have 366 words in it, which was a challenge but a lot of fun. Barrington Stoke acquired the story and have included it in a special pack of eight books  aimed at schools and libraries in the UK. And here’s something not everyone knows: Yellow Rabbit is based on a true story. I lost my yellow rabbit when I was a kid and always wondered where it ended up. This story is what I wish had happened to my lost toy.

Attending two conventions that blew my mind. I’ve heard artists and writers talking about going to ‘cons’ over the years but never knew much about them. When I heard that a crew of children’s and YA authors were going to the World Fantasy Convention in Brighton, I decided to take the plunge. Not only did I get to meet and hang out with all these good writerly people, but I learned a lot. I returned with a notebook filled with scribbles and ideas, inspirations and advice. The author panels were fantastic, the art show was impressive and the attendees’ passion for books was phenomenal. I am hooked and will definitely go to more conventions. I like the look of this one.

A few weeks later I volunteered at Thought Bubble in Leeds, one of the top comic and graphic novel conventions in the UK. Once again, I didn’t have any idea of what I was getting into but I am so glad I took the chance. Thought Bubble is a busy, colourful, wacky, inspiring festival of words and pictures. There’s room for everyone, from the twelve-year-old boy selling his hand-produced comics to superstars like Fabio and Gabriel, the Brazilian twins that had a constant line of people waiting to meet them. There were plenty of superheroes, of course, but there were many other kinds of comics and graphic novels. One of the things I like the most about this community is that is welcomes people who create and publish their own stuff. The Do It Yourself ethos is quite empowering. Thought Bubble’s organisers were amazing, the writers and artists were wonderful and the fans were fantastic. After two full days of running around, hauling furniture and managing crowds, I was exhausted but inspired.

And all this inspiration is spilling over into my aspiration for 2014: to bring my writings and artwork closer together. How will it manifest itself? I have a few ideas but they are too premature to share yet. In the meantime, I’m editing my next book for teens (stay tuned on this one) and starting to think about the small illustrations that will go with it. On the art side, I’m planning new paintings for an exhibition in the spring. Preparing, pruning, planting creative seeds – perfect winter activities.