And reaching the sky. 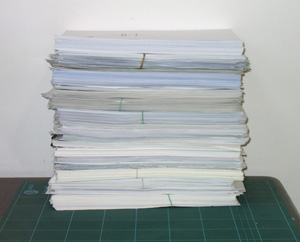 Recently I added this photo to my Powerpoint presentation for school groups. It’s a mountain of The Blackhope Enigma

drafts, intermingled with comments from my agent. The oldest draft is on the bottom and the most recent at the top. Actually, this photo doesn’t even include the later revised versions I did after my editors commented on it. The pile is even higher now, and I look at it from time to time in awe.

Writing the book took all the guts I could muster. I never had the feeling I should give up on it, though I certainly had my dark moments from time to time. I really felt I HAD to write this book, even though I had never attempted such a thing before. Besides, I was already used to persevering in my illustration career. It took years of marketing my work to New York publishers, and reworking my portfolio, before I was taken on to illustrate my first children’s book way back when (a chapter book for the lovely folks at Knopf, by the way!)

If I had needed to be inspired 24/7, I would never have finished The Blackhope Enigma. I just had to show up at the desk and focus. Some days it worked better than others (some days it didn’t work at all), but I just kept going.

I’ve read some excellent essays by other children’s and YA authors about sticking to the job. I particularly like this one by Cassandra Clare, author of The Mortal Instruments
and Infernal Devices fantasy books.

There is nothing like the feeling of holding your printed book in your hands. But it is almost as boggling to look at the pile of drafts or the folders of mind maps, flow charts and outlines – and recognize that you worked your way, the best you could, through plot problems, unconvincing dialogue, faults of logic and a whole host of typos.

Thinking on this idea of climbing a mountain, I remember my first big climb up Ben More on the isle of Mull. I was with a group of very experienced walkers and had done pretty well in keeping up with them. As we neared the top, it became clear that we would have a steep scramble over boulders. I watched a woman being hoisted up a huge rock and knew I couldn’t do that. I panicked. I wanted to stop and go back – but, as the others told me, I’d come too far to turn back. One of them gave me the best advice: find a different way through the boulders, and then keep your eyes on the path directly in front of you. Don’t look forwards or backwards – keep your eyes on the path before you and go step by step.

I did it. Twenty minutes later, I was drinking tea at the summit. It hadn’t been easy, but it had not been the nightmare I imagined. I looked back down the mountain and thought, I came from there. Not unlike looking at a very significant pile of papers on my desk.