A Visit to Doon Hill

In which I encounter fairies.

It started as a typical forest walk in the Stirlingshire countryside. We passed the Old Kirk cemetery (of that, dear reader, you shall hear more close to Hallowe’en.) and set off past a few houses towards a path leading up the wooded mound that is Doon Hill. I have always wanted to visit because of its strange legend. A seventeenth-century clergyman, the Reverend Robert Kirk, is said to have either died or disappeared there after conducting lengthy research into the fairies that he believed lived on the hill. His spirit is said to reside in the ancient pine in the background of my photo (left).

As we climbed, we noticed the dirt path glittered with silver and purple metallic fairy silhouettes that previous visitors has strewn. This was just the start. After the short climb we arrived in the clearing at the summit and found all the trees and many bushes festooned with clooties, strips of cloth covered with handwritten wishes. 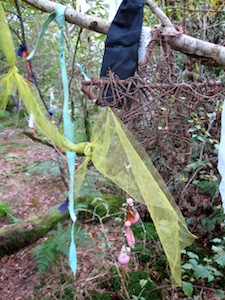 Clootie wells and clootie trees are a fascinating part of Scotland and Ireland’s Celtic heritage. I couldn’t help but be touched by the variety of cloths tied to the trees and tiny talismans tucked into the moss. 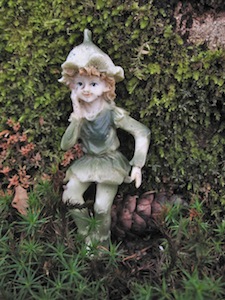 Pilgrims had left letters in sealed plastic bags, half-burned candles, scraps of paper wedged between branches. The place was alive with visitors’ hopes and intentions. And even the mass-produced fairy figurines placed there seemed to have developed individual personalities. 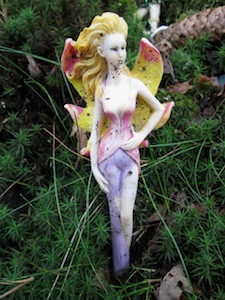 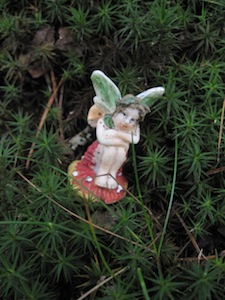 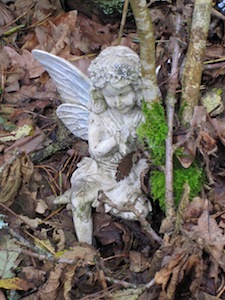 One or two of them looked almost sinister in their hideaways of dead leaves. Under the green canopy of trees, the air was still and we felt far, far away from the town, which was only a fifteen minute walk away. We decided to head downhill along the same path we had climbed. But it became clear we were on a different path when we got to the bottom and found a grassy crossroads.

We agreed that we should turn right and set off. We came to a bend in the river which was so quiet and dark, I thought it was a pond. There were no footprints in our path, only hoof prints, and the reeds grew taller and taller. We could no longer see the town or hear traffic. Suddenly we turned around and saw that we had left Doon Hill behind. It loomed on the horizon as dusk began to fall. I wouldn’t say I panicked, but I felt distinctly odd. There was that slight ‘Blair Witch’ sense of having consulted the map, known where to go and still ended up someplace one shouldn’t. The idea that a fairy horse would come swooping down and take us away to meet Queen Mab would not have been out of place.

We quickly turned back. The hill took shape on our left and it felt like we were being watched by a thousand eyes. When we got to the crossroads, it was obvious that we were just a few paces away from the main path back to town. Somewhere behind us, the owners of those thousand eyes were laughing at us.